As Linda and I were walking around the antiques fair on Saturday, I came across two little 'Sea Serpent' ornaments, which I bought for next to nothing. I used to have lots of these, but as will happen, they 'disappeared' after I divorced my first wife.

Most of these were collected when I spent several weeks in 1973 and 1972 researching and writing a book about the Loch Ness Monster. My interest in the loch goes right back to the early 1960s, when my brother and I managed to persuade our parents to take several summer holidays in the Great Glen. As an 11 year-old, I found camping by the loch a thrilling experience: the dark, brooding waters, high fringing mountains and rapidly-changing weather imparts to Loch Ness a feeling that almost anything might occur in its thousand foot depths. The first illustration below is of my brother Rob (on the right!) and me by the Loch in, I should imagine, 1963. The curious vehicle we are proudly leaning against was unique: made by the 'Dormobile' company, Martin Walters, it featured a removable dinghy as a roof extension. Believe it or not, my brother and I slept in this 'loft space' in hammocks while our parents were below! Can't really imagine modern teenagers being too impressed! Our father was quite high up in the Ford commercial vehicle section and was allowed to borrow similar campers whenever he wanted.

As a pragmatist, I arrived at the loch in 1972, convinced that a large oligotrophic body with very little fish life other than migratory species could not possibly support a breeding colony of large creatures. Numerous surveys carried out by me and fellow-author Phil (a chemist) lent weight to this idea. During our two expeditions, we interviewed all the surviving famous witnesses and chatted with the major personalities: Tim Dinsdale, Adrian Shine, Robert Rines being the most convincing.

The bizarre thing is that - having convinced ourselves that Nessie must be purely a creature of legend - we saw it (or one of them!) at close range! The image below is one I drew for one of my books. 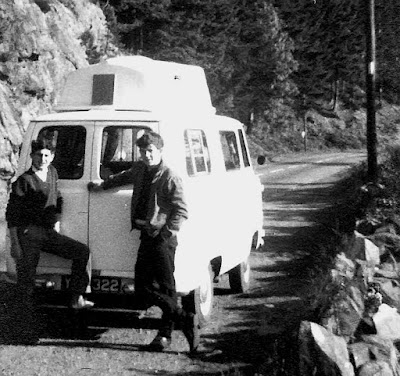