Just a quick pre-amble: since I'm still unable to walk or drive far, and because the cold weather really wouldn't assist in the pneumonia healing process, I've decided to post what I hope most of you might find to be interesting Norfolk birding anecdotes.


Great Bustard Otis tarda
Norfolk: New Buckenham, two immature males, 7th to 10th February (A. J. Prater, R. Shaw et al ).
The 'R Shaw' listed as a co-discoverer of these fabulous birds was, in fact, Robin Shaw, at the time a good friend and former colleague of mine at Hellesdon High School. He was predominantly an RE teacher, but, like me, also worked with some of the more challenging pupils in what was called the Enterprise Department. He was a very keen wildfowler and rough-shooter and lived in an old farm in New Buckenham.

One day he was shooting pigeon in emerging rape fields near Carleton Rode when he came across two large, unfamiliar birds. Unusually, he didn't blast them to perdition, but - so he told me later - went and alerted Richard Millington, who lived in New Buckenham at that time.

I heard about the birds on the 9th (Monday) and, although I knew the timing was going to be touch and go, resolved to have a look the next morning before work. I had recently started a new job as KS2 leader at Acle Primary School, so wasn't going to rock the boat by 'throwing a sickie' or turning up late. The Headteacher knew perfectly well I was a keen birder (a factor in appointing me to replace Norfolk bird personality Bill Urwin!) and would have guessed without too much trouble where I'd really been!

Accordingly, I arrived well before dawn to find the hedges already lined with silent, anticipatory birders. I parked where I could, then joined the crowd. Among these were two people who were to become great chums: Martin Read and his then partner, Sally. Later these two, Linda and I would undertake many twitches together and two or three Scillonian pelagics.

I stood with Sally and Martin for perhaps an hour: the sky began to lighten perceptibly, but time was pushing on: I glanced repeatedly at my watch before making the agonising decision to leave. I said my goodbyes (Martin had already decided to call in sick to his teaching job!) and walked back towards the car. As I climbed in, I looked back and saw Sally and Martin waving an apparent farewell: you've guessed it: Martin phoned later to say they were trying frantically to alert me to the fact that the Bustards had just stood up fifty metres in front of them! (How could two huge birds hide so well in a six-inch high rape crop?)

There are two footnotes to this story. When I arrived at Acle  just before the start of school, I told the Head where I'd been: of course, he said I should have hung on for an hour or two: ("Bill would have! I could've covered for you!")


A final note: the following weekend I was walking the 'back route' into Winterton Blocks from Somerton when I flushed a large bird out of  a stubble field: as it flapped across the ground (somewhat reminiscent of a Mute Swan's take off strategy!) it displayed startling white wing patches: I raised my binoculars: Great Bustard! 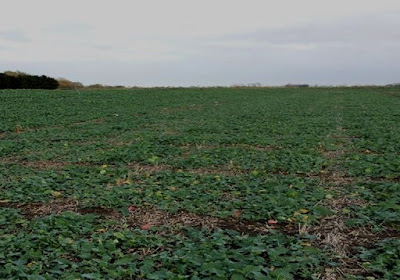