Review of the Year Part 2: the local patch.

Although there's been lots to tempt me (and my buddies Brian and Martin) away from the Yare Valley - and what a year it's been in Norfolk for long-staying rarities - I've spent plenty of time plodding around the local patch.

For much of the year Brian and I have been without our third 'Last of the Summer Wine' team-member: Norman had a quad by-pass operation and has been recuperating. Luckily everything went well and we should be up to complement again in the new year!

Strumpshaw & Buckenham can seem a little devoid of birdlife to first time visitors, but the wildlife is there: you just have to persevere! The following images are in chronological order and demonstrate the quality and variety of what can turn up if you're patient: there are a couple from other parts of the mid-Yare Valley.

I should say: many of these birds have been discovered by warden Ben Lewis: since his arrival the number of 'goodies' that are identified has increased dramatically...

Review of the year Part 1: it's not all about rarity-chasing (But that's fun too!)

Although it's been a great year in Norfolk for photographing the more elusive species such as Shrikes, Calidrids, rare warblers and chats, my favourite moments in 2015 have often involved more common plants, animals and astronomical events. This was the year of the eclipsed 'Super Moon', a succession of conjunctions and occultations, the first Lizard Orchid in Norfolk for fifty years and twin Harbour Seals born at Winterton...

It's also been the year I retired from space memorabilia dealing and public music performance, after fifteen years in the first case and fifty in the second! On the plus side, though, my third book was published and the meteorite sales and lectures continue to flourish.

I was looking through Twitter the other day in an attempt to find the contact details of  an old friend when I noticed my name on the tweet (?) of someone I have never met, as far as I'm aware. He described me as 'notorious'! Intrigued, I cross-linked and scrolled about a bit and discovered other adjectives I've attracted have included bizarre, dubious, infamous and questionable! Isn't it amazing that my little private blog invokes such strong reactions among a few individuals?

Anyhow: here are a few of my favourite photos of 2015: thanks to those of you who follow (and hopefully enjoy) this blog - Happy New Year, and don't forget to say hello!

....although as Linda & I drove down from Egmere on the B1105, a Swallow sp. flew parallel with the car for a few seconds: as is usually the case, there was nowhere to park and a steady stream of traffic.

A walk and drive around Holkham was unproductive apart from scores of Pink-feet and a few Whitefronts, so we moved on to Brancaster Staithe (just a couple of Little Egrets) and Choseley. A RLB was available at a mile range, so we didn't bother to take the necessary walk. And so to Titchwell...

Lots of Marsh Harriers coming in to roost, but no Hens: a Barn Owl was nice, though (the first of a few we encountered) On the way home we paused at Wells Quay, bumping into Rob Holmes - great excuse for a mardle! The long-staying Shag was visible distantly in the gloaming, so I grabbed a few grainy images. Believe it or not, despite a birding excursion to West Wales in June, this bird was a year tick! 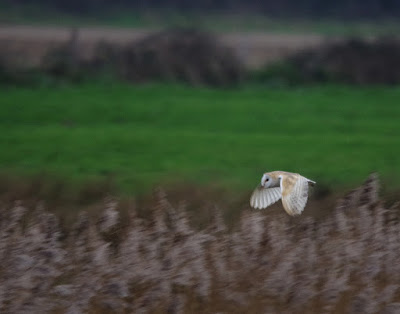 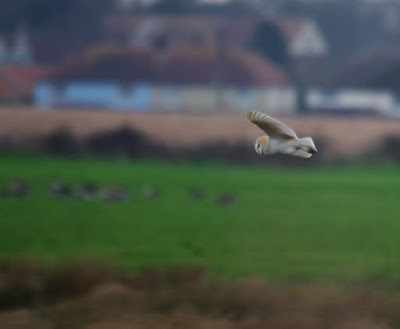 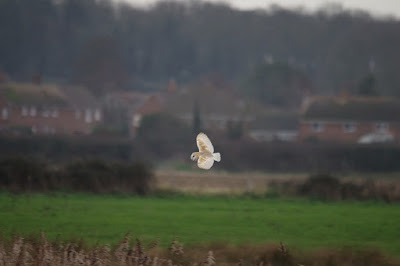 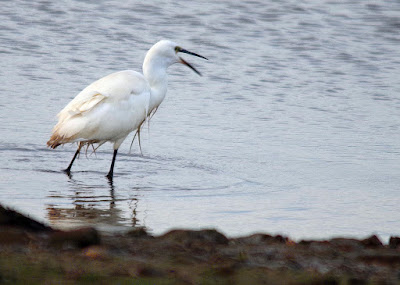 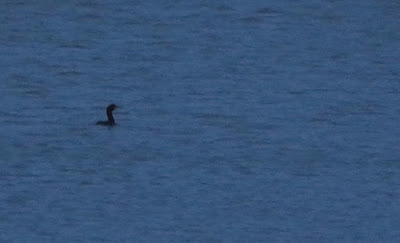 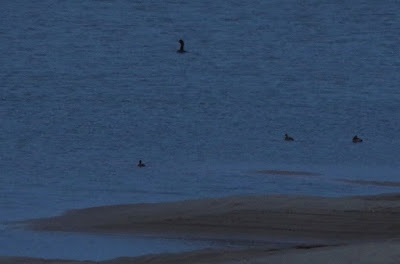 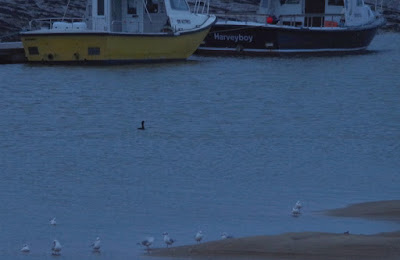