I've had a Fitbit of various sorts for nearly ten years: they are terrific little bits of kit! They monitor all your exercise, calorie burning, pulse rate and even tell you the time! I can reveal that I have averaged over four miles walking a day since I first put on my Fitbit! (See picture!)

An excellent feature is that you have your own online account with a customisable 'dashboard' that you can access from any device. Until last week! Internet megacorp Google acquired Fitbit on November 1st for around $2 billion, adding it to a portfolio that includes Facebook and YouTube. No problem there (unless you're against monopolies on principle)

A couple of days ago I tried to access my dashboard, only to find the link 'hung' without connecting me. Lots of e-mails to the Fitbit helpline were not particularly productive and I tried everything that usually solves this kind of issue, but to no avail. Fortunately my stepson Simon is an IT whizz and put me right: the app. now only works in Google Chrome! Apparently IE 11 (my preferred browser for twenty years!) is no longer supported by most applications (despite it being bundled with the latest version of Windows 10!) 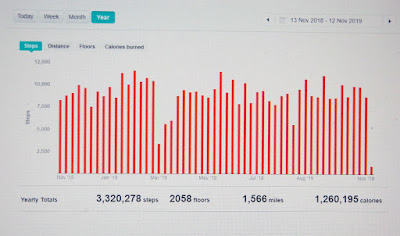