What has been interesting is the deafening silence from several 'experts' I contacted: I would have thought the photos were at least worth commenting on! 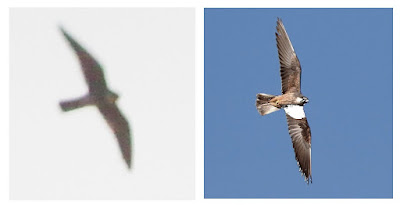 Thanks for your valued opinion!
Say hello if you bump into me on the North Coast!

Hi David,
I've seen Eleanora's falcons in Crete and at Essaouira, on the Moroccan coast, and my overall impression of them is how powerful, effortless and gregarious they are. My first thought on seeing your photos was that the jizz is right for EF - long pointed wings, long tail, typical face pattern - and having looked closely again I haven't changed my mind. I'm no expert, but if I'd seen it I would be counting it as an EF! Well done, and thanks for your wonderful blog (and for showing me the clearwings at Strumpshaw, which I otherwise would never have been aware of!),
All the best,

Hi John!
Thanks so much for taking the trouble to respond: your opinion (backed up by personal observation) is really worth having.
!
I shan't submit the observation to the BBRC: I haven't done for years. I remain 99% certain the bird was an Eleonora's, as do all but one of the sixty or so people who have e-mailed or phoned me!