Holding three planets in my hand

When Linda and I first met we decided to 'do' the Open University Astronomy modules: this was with a view to starting a meteorite business as a second income. This, as you may know, culminated in Spacerocks UK, which has been operating for over twenty years. At the time just a handful of lunar meteorites had been collected - all in Antarctica - and, for the first time it was being suggested that the SNC group might have originated on the planet Mars. Not everyone was convinced: I recall offering Sir Patrick Moore a Martian sample as a birthday present. He declined, saying that he didn't believe they were from Mars! Only a small group of researchers were given the privilege of handling these rare meteorites: even seeing one was a memorable experience

Nearly forty years later the situation has changed somewhat! Although lunaites and Martians are still pretty scarce (430+ and 140+ respectively) they are now available at surprisingly reasonable prices: we always hold good stocks of both! More intriguingly, there are meteorites which are good candidates for having originated on Mercury and on the prehistoric Earth! 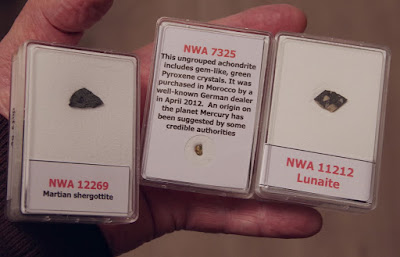