Red-throated Thrush brings on an attack of nostalgia!

I imagine many of you who are kind enough to follow this blog also glance at 'Birdforum' from time to time. It is nowhere as popular as it once was, but is still a good way to keep up with the gossip!

At the moment there's a certain amount of debate about a Red-throated Thrush that was reported in Skegness on Monday. Several photos have appeared online and - assuming they were taken in the UK - I can't see a problem. It has become quite fashionable to adopt a cynical attitude to birds seen by 'casual' observers, but I'd've thought the Devon Mockingbird would have shown that 'normal' people can be familiar with what they're likely to see and what is something different.

Looking at the photos took me back over 25 years to when Linda and I travelled down to Walton-on-Naze to see - and video! - the UK's first record of this attractive bird. With old chums Bob Walker, Martin Reed and Dot Machin, we eventually enjoyed great views near the cliff-top tower. Pretty much the same 'crew' assembled to enjoy two other rare thrushes around about the same time: a Black-throated Thrush near Peterborough and a Naumann's Thrush in, of all places, the back garden of my childhood home in Chingford.

All these were well before I had a DSLR: instead, I used to paint or draw the birds I saw in my daily diary! 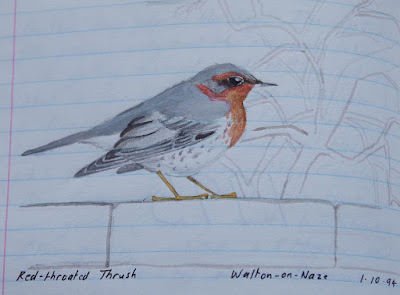 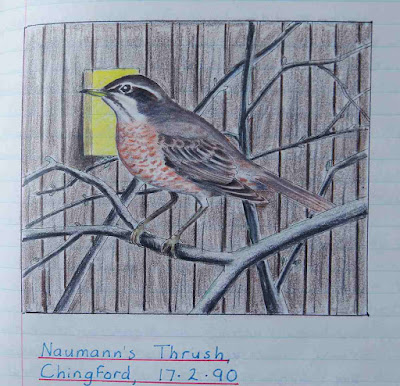 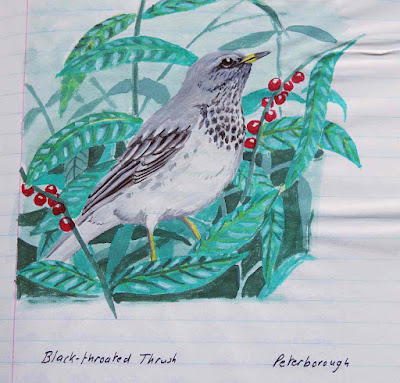