Watch out: there's an Asteroid about!

Over the next few days the Asteroid Vesta (the fourth to be discovered) will pass through the bright constellation Leo. This is easy to find, being high in the south eastern sky, its 'head' stars making the shape of a backwards question mark.

4-Vesta was discovered in 1807 and is the second largest asteroid: it makes up nearly a tenth of the entire mass of the Asteroid Main Belt. It is the source of the HED meteorites (Howardites, Eucrites and Diogenites) which, it is believed, were blasted into space by the formation of the large craters that are visible towards Vesta's poles.

You'll need binoculars or a telescope and clear skies, but at magnitude 6, Vesta should be quite easy to find. Best of all - which I'll have a bash at - is to take photos a few days apart, when the little planet's movement will be obvious. 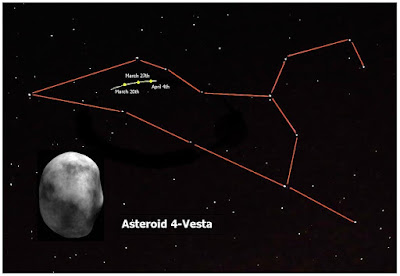 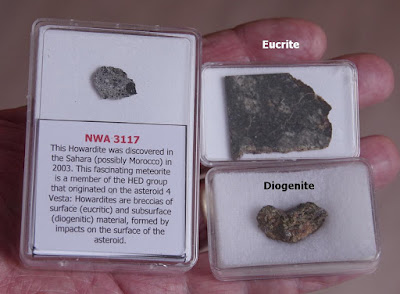