Part of the thrill of making a living selling meteorites is that I have the chance to get up close and personal with some amazing space rocks that most people will never see, never mind hold! These include meteorites from Mars, the Moon, several asteroids and even - possibly - Mercury!

Among my favourites are the carbonaceous chondrites, which some people believe may have brought life to the prehistoric Earth! This rare class includes several groups, named after the region where the 'type' specimen was found: CM (Murchison) CV (Vigarano) CI (Ivuna) and so on.

The photos show a trio of CV3 slices: the '3' is part of the classification that indicates that the meteorite contains numerous, large spherical chondrules. These little objects are among the oldest matter in the Solar System, so that CV3s are very primitive, ancient relics of the early days of planetary formation: over 4.5 billion years old!

The dark carbonaceous matrix contains variable amounts of different amino acids. Although not in themselves 'alive', these macromolecules are the building blocks of polypeptides, nucleotides and nucleic acids: the self-replicating bases of life on Earth. (And presumably elsewhere in the Universe!) Your body contains around 20 amino acids: some CV3s have over 100!

The famous astronomers Fred Hoyle and Chandra Wickramasinghe proposed that the transfer of life from star system to star system takes place when cometary or meteoritic material 'seeds' a suitable planet. 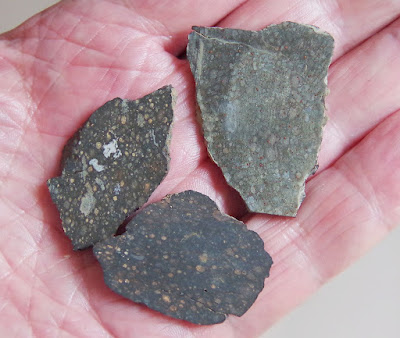 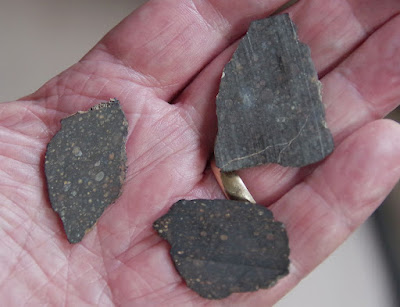