If, like me, you have been sickened by online images of ATVs laden with dead Mountain Hares or Hen Harriers and Golden Eagles rotting on Scottish grouse moors, you may wonder what constitute the real threats to our wildlife and environment. Here are some checkable facts about climate change:


· The Intergovernmental Panel on Climate Change (IPCC) is a scientific and intergovernmental body that monitors global climate change and reports its findings and suggestions to the United Nations and at periodic conferences.

· It is generally considered that human influence on global temperature became a theoretical possibility from 1950. Since this date the GW trend has been equivalent to around 1.2º per century.
· From 1974 to 2006 the planet experienced the fastest warming rate since 1950, equivalent to 2º C per century. Compare this to the published rate for the period 1694 to 1733 of 4.3º C per century

· The IPCC published its first report on global warming in 1990, predicting a rate of 3º C per century: in fact the recorded rate has been equivalent to 1º C per century.

· Since the early 2000s around 3,600 ARGO buoys monitor the temperature, salinity and currents of the Earth’s oceans. In the first decade of their deployment, they recorded an average warming of the oceans of just .02º C , equivalent to 0.2º C per century. This equates to a 1º C rise requiring over 400 years to come about!

Looking at these largely undisseminated facts, it's reasonable to suggest that lawmakers and industrialists might be hyping the global warming situation to take our eyes off a more alarming situation that is eminently resolvable!

One might ask, what is the point of 'fighting climate change' if, among others, African poachers, Maltese hunters, South American loggers, Scottish gamekeepers and British property developers are inarguably bringing about the rapid destruction of the planet's wildlife. All of these factors could easily be addressed if the political will existed.

The graphs below demonstrate just how easy politicians - and their compliant statisticians - have found it to manipulate data - and hence public opinion. In the first graph the Y-axis (vertical scale) covers a misleadingly small range of values: the Y-axis of the second graph uses a more realistic range of terrestrial temperatures. 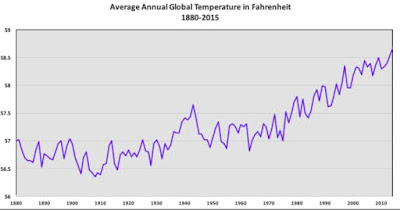 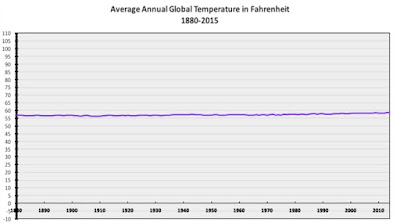