The day before Mick Davis found and photographed a probable (definite, to my eye!) Eleonora's Falcon near the Plantation at Horsey, I photographed a dark raptor at a considerable range inland of the dunes. Brian and I had seen and photographed several Kestrels, Sparrowhawks, Marsh Harriers and Buzzards, but I only managed this single shot. I posted it on the rare bird group on Facebook and the great majority of responses have been in favour of a Red-footed Falcon, a Hobby, a falconer's hybrid or - yes - an Eleonora's.

Personally I thought melanistic Kestrel, but have been assured that the wings and tail are wrong for that species. Lack of any obvious barring on the tail means it's not Mick's lovely bird. I make no claims for it, but just put it on here to remind me of it in years to come! 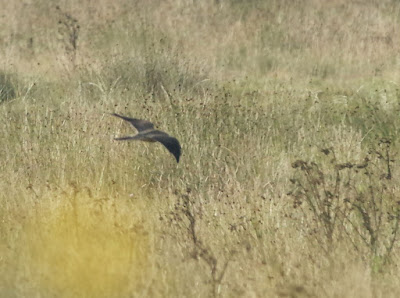