Some of you may recall that I have a decent Sky Watcher 127 Maksutov reflecting telescope, coupled with a ZWO CCD camera, with which I've taken some acceptable photos of the Moon. With Jupiter and Saturn both in the southern sky before dawn, I thought I'd have a bash at imaging one or both of them. Before dusk, I set up the 'scope, camera and laptop and got some terrific screen-filler oak leaves on a tree nearly half a mile away!

Crawling out of bed at 3.00am, I started off by observing both giant planets (as well as M31, the Andromeda Galaxy) and was thrilled by how well I could see Jupiter. I could make out half a dozen cloud belts and the four Galilean satellites, all on one side. Try as I might, I could not get the CCD to put an image on my monitor: most frustrating. I won't be beaten, though: watch this space! I took a few photos with my 400mm zoom and a combination of converters, but the results were predictably inferior to what I could see 'live' in the telescope. 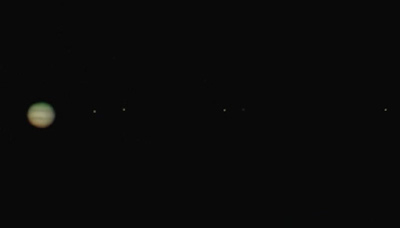