Time for a rant! I'm a massive cricket fan: I love watching it - at all levels - and had ten great seasons playing in various Norfolk League teams. Above all else,  I take great pleasure in the achievements of the England team. Brought up as I was during the era of Truman, Statham, Edrich, et al, it's fantastic to witness the achievements of the current players. (I shan't dwell on the insanely talented Botham, because he seems to have evolved into an utter a*sehole.)

Two superb captains of the red and white ball versions of the game ( Cook and Morgan, respectively) have led England to a record-breaking summer of huge achievements. Under their captaincy players like Bairstow, Root, Anderson, Ali, Hales and the rest have played some magnificent innings and bowled with guile and penetration. The fielding - especially the catching - has been unparalleled at times.

And how are these fabulous achievements acknowledged by the British media? Barely at all is the answer: particularly now the football season is upon us (did soccer ever really go away this year?) Breakfast TV on the Beeb this morning failed even to mention the current one day international series against Pakistan, which England are winning 4 - 0 with Sunday's game still to come. In contrast there was ten minutes chat about the England soccer team and their 'new' manager.

If you wanted to watch this summer's fabulous international cricket, when the Test and ODI teams played Sri Lanka out of the park (England won the inaugural 'Super Series" 20-4) and broke all kinds of records against Pakistan you either had to attend a game or watch forty minutes highlights on Channel 5 (an hour's programme with 20 minutes advertising). This was shown at 7.00pm initially, but rapidly moved to midnight! How different to the hours of gymnastics, tennis, cycling and golf we were bombarded with on prime time TV over the summer.

The BBC should, IMHO, be ashamed of themselves for abandoning our national game to satellite and commercial stations... 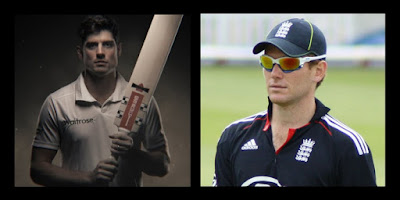