Perranuthnoe: a true ghost story from forty years ago!

Whenever I come across reports of the long-staying Hudsonian Whimbrel in Cornwall, I'm reminded of a most terrifying manifestation that I experienced back in the early seventies...

At the time I was a member of a somewhat popular folk-band ( 'Culverin') that managed to secure a  Summer's work at a folk club in  Cornwall. The six of us were given the keys to an old cottage in the village of Perranuthnoe, near  St Michael's Mount, in which to stay.

After a couple of weeks, the owner of the club was so pleased with our efforts that he gave us an evening off: he suggested a barbecue and provided us with crates of beer and some chops and sausages to cook on the fire. (I still ate meat in those days!)

As dusk approached we walked through the old wooden gate of the cottage, straight onto the shallow, sandy beach. The tide was out and there was the beginnings of a sea mist. The lead singer, Bob and I walked casually down to the water's edge, while John, the other guitarist, and our three girlfriends remained to tend the fire. It was Bob (a six foot six tall man who was frightened of nothing) who first spotted the figures: there, at the edge of the mist were three barely discernible outlines wading knee-deep, parallel to the shoreline.


Bob and I squatted down together. Could they be smugglers? Some other band of desperate criminals, up to no good on this isolated fore-shore? As the trio drew level with us, they seemed for the first time to become aware of our presence: they turned towards us. It was at this moment that I shook Bob's arm and whispered hoarsely


And indeed, the three figures approached the beach without the slightest disturbance of the water through which they were apparently wading. Suddenly the ravelling mist swirled and cleared: for the first time we could see the figures plainly at perhaps twenty metres range……..That sight will haunt my dreams for the rest of my life: the three 'men' (though they hardly deserved the appellation) can only be described as having the appearance of rotting corpses. Their empty eye-sockets stared vacantly towards the beach, while shreds of skin and flesh hung from their emaciated frames.
Someone screamed….it could have been Bob or me: it doesn't matter…..The sound galvanised the pair of us. We turned and ran up the beach, past the flaring  driftwood fire and into the house. From behind us we heard gasps of horror, and the panic-stricken footsteps of our companions.

That night was spent in sleepless terror of what we had seen only too well on the deserted beach. The doors were locked and barricaded with furniture, but none of us dare surrender to sleep.  As the first light of day spread from the East, we summoned the courage firstly to peep through the thickly-curtained windows, then to open the door and venture outside. John and I had abandoned our acoustic guitars in our rush from the beach.  The neck of John's £300 Epiphone was warped and twisted beyond repair by the chill sea-mists: it somehow didn't seem to matter.

Later that day the club-owner dropped by.

"Did you have a good evening, boys and girls?" he enquired " Not...disturbed at all?"

We finished the Summer season and went on to further musical success, but, by common consent, that night on the beach at Perranuthnoe was never discussed by any of us.

The bottom image is of Bob and me when we met ten years ago: he ended up as a Headteacher in Essex and I didn't! 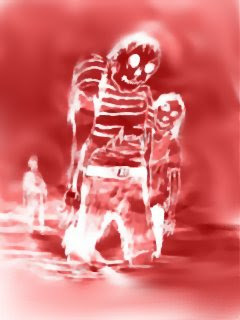 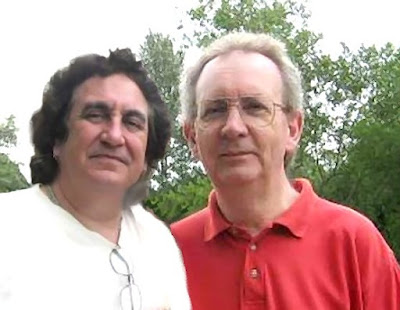