An evening with Ben Garrod

Last night Linda, Sue and I joined an enthusiastic audience at Norwich Cathedral to hear Prof. Ben Garrod's talk about the Diplodocus. In general, Prof. Garrod was entertaining and informative, but - considering he's a lecturer in evolutionary biology at UEA - he made several glaring gaffes. The most surprising came during a somewhat dismissive response to a question about whether the DNA cloning featured in Jurassic Park will ever become reality: he replied that reptile erythrocytes (red blood cells) don't contain a nucleus: no nucleus, no DNA. This is simply not true! Both bird and reptile erythrocytes do have nuclei. And, as he continually reminded us, birds are actually dinosaurs. In evolution, it is almost unknown for an organism to regain an inherited factor once it has disappeared from its genome. Furthermore, to side-step the obvious follow-up response that, even if his claim were true, white cells do contain a nucleus, he made the astonishing statement that Mosquitoes only 'suck' in red cells!

So: a generally entertaining - if somewhat popularist and over-theatrical - talk was slightly spoiled for me by some dubious assertions and over-long responses to trivial questions such as 'What is your favourite dinosaur?' I'm afraid Prof. Ben suffers from the same celebrity-related issues as a certain TV Astronomy pundit, sacrificing substance for style! 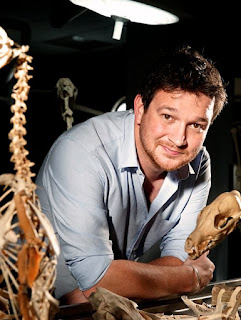