I note with interest that a Pine Marten has been reported in north-west Norfolk, apparently on the Sandringham Estate. A couple of years ago Brian and I visited the Brecks, looking for some reported Parrot Crossbills near Mayday Farm in Suffolk: I can't remember the name of the location, but it was another farm to the south along the B1106.

We parked in a layby opposite the track leading to the farm and, as I was collecting my gear from the boot, I glanced along the track (shown below) to be confronted by the amazing sight of a Pine Marten 'looping' across the path. I've seen every UK mustelid and was (and remain!) absolutely certain this was definitely a Marten. I've since mentioned the sighting to several people involved with conservation of Red Squirrels in the UK and have been told that Pine Martens '...may well have been reintroduced in various places, because of their known preference for eating Grey Squirrels.' I was told that Greys are less agile and are easier prey than Reds!

Given that Polecats have naturally spread across country and back into East Anglia, I suppose it's just possible that Martens might have done the same, but on balance,  a stealthy reintroduction seems more likely. 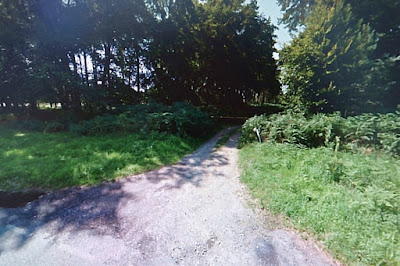