Total eclipse of the Moon

If you have an interest in Astronomy - or just enjoy seeing unusual sights in the sky - when the Moon rises tonight it will be in the Earth's shadow and appear dark red in colour. The Moon, of course, doesn't itself give off light, but 'shines' by reflecting sunlight. During a lunar eclipse the only light it receives is red, having first been scattered through the Earth's atmosphere.

Ironically, the weather forecast for Norfolk at 9.10pm tonight (when the Moon rises) is for heavy showers or thunderstorms - the first in weeks! Still: fingers crossed that the clouds stay away long enough for a glimpse of the event: if you've never seen a lunar eclipse, this will be the longest this century! 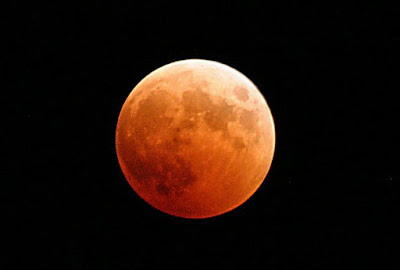 David
I've been looking at birds for fifty years and imaging them for thirty. My wife Linda and I used to chase ticks all over the UK, but stopped when we'd seen 400 species. (Back in the 80's, we were half of a four-person team that won the national 24-hour birdrace three times!) We're 'on' 430-odd now (UK 400) but tend to concentrate on wildlife within an hour's drive of the front door these days!