Dark skies: a thing of the past...

You may recall that I treated myself to a GPS unit for my camera, intending to use it to photograph two large, showy objects: the Orion Nebula and the Andromeda Galaxy. You may also recall that our 'neighbour' (and I use the term very loosely!) finally managed to get planning permission for a bungalow to be built right up against our eastern boundary - this after three planning refusals at parish and district level. I suspect a brown envelope was involved somewhere along the line!

One of the reasons we bought our house was because the un-overlooked garden allowed views of the dark northern and eastern horizons: this is the direction in which you can best view the aurora, noctilucent clouds, comets and the planets Mercury and Venus. Building work is about to begin next door, so this would have been my last chance for dark eastern skies. Except.... the stupid woman still has Christmas lights on all night: these run along the back of her house where they serve no function apart from removing any possibility of astronomy or astrophotography. 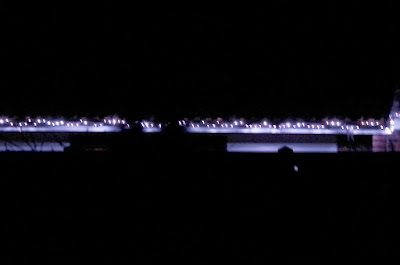