You may remember I mentioned a while back that there was just one fossil I'd always wanted to complete my palaeontological bucket list: a Eurypterid.

These huge arthropods (the largest that have ever lived) swam in the shallow seas of the the mid Ordovician to late Permian Periods (470 to 248 million years ago). They were wiped out by the greatest mass extinction in the history of the Earth (as discussed in my latest book) Probably just as well: they were formidable predators!

Thanks to my fossil-collecting and generous older brother, Rob, I now have an example in my collection! Just the rostrum (armoured head) but totally distinctive!

Many thanks, Big Bro'! 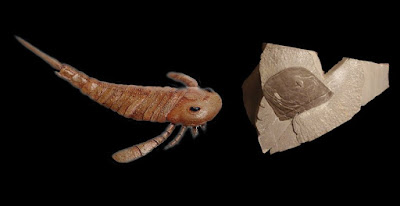