Perseids: worth looking out for!

The Perseids are one of the few genuinely reliable meteor spectacles: they are bright, slow and - unlike some 'showers' - frequent enough that a thirty minute skywatch will produce enough 'shooting stars' to make it worth staying up late for!

Last night started off cloudy here in East Norfolk, but about the time the GB mens' 100m relay team were winning their gold, the clouds parted for an hour or so. Linda and I are lucky, in that our patio has a northern aspect, so we could stand and look north east towards the W shape of the constellation Cassiopeia. (Meteor showers appear to originate from a certain point in the sky: this is called the radiant, and, in the case of the Perseids, is the constellation Perseus. Looking towards the instantly-findable Cassiopeia gets you in the right part of the sky)

In an hour we counted seventy or so bright meteors and numerous fainter ones: using our night vision scopes we could see hundreds that would have been invisible to the naked eye (as well as a surprising number of satellites!)

If tonight is clear (and it's supposed to be) it's well worth having a look around eleven o' clock. 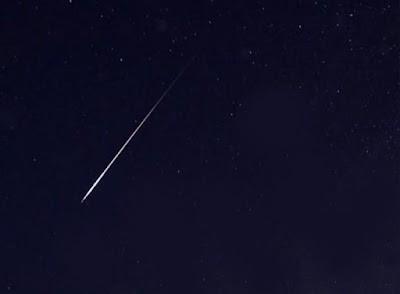