Nothing to grouse about!

Astonishing! I've received five e-mails and two 'comments' telling me that the female bird in the Reeve's posting is in fact a Red Grouse! I've replied to the e-mails, but, as you know, I don't publish anonymous comments on here, so instead would suggest the authors might benefit from a glance at Dave Appleton's excellent pheasant photo collection:

As you'll see, the female 'Blue Pheasant' does bear a superficial resemblance to a Red Grouse, but it's been a few years since there's been enough heather on Blofield Heath to support a population of those! 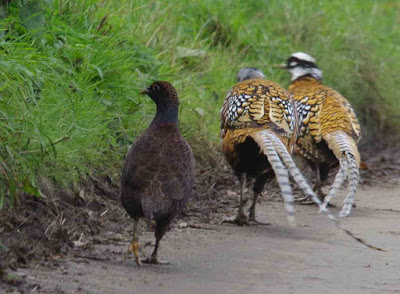