The siege of Sidney Street: an amazing coincidence!

This afternoon I 'phoned my elder brother Rob for a chat: although we only see each other a couple of times a year, we are good friends and enjoy talking over old times. Rob maintains our 'family tree' document, started by our parents forty or so years ago. The conversation got round to a discussion of our paternal grandfather's brothers and sisters: Rob had recently had contact with the family of one of our great uncles. I remarked that I had been told as a child that one of the family had been a Police Sergeant, who had been shot at a premises in Houndsditch: the culprits had made their escape before ultimately being trapped in a tenement in Sidney Street.

This evening, Linda and I settled down to enjoy an episode of 'Murder Maps' on the TV and were amazed to realise that its subject was the Houndsditch murders and the siege. My great uncle (William Thomas Bryant) was mentioned several times!

Sergeant Robert Bentley knocked on the door of 11 Exchange Buildings. The door was opened by Gardstein, and Bentley asked him: "Have you been working or knocking about inside?" Bentley did not answer him and withdrew inside the room. Bentley gently pushed open the door, and was followed by Sergeant Bryant. Bentley stepped further into the room. As he did so the back door was flung open and a man walked rapidly into the room. He was holding a pistol which he fired as he advanced with the barrel pointing towards the unarmed Bentley.

Sergeant Bryant later recalled: "Immediately I saw a man coming from the back door of the room between Bentley and the table. I noticed he had a pistol in his hand, and at once he commenced to fire towards Bentley's right shoulder. He was just in the room. The shots were fired very rapidly. I distinctly heard 3 or 4. I at once put up my hands and I felt my left hand fall and I fell out on to the footway. Immediately the man commenced to fire Bentley staggered back against the door post of the opening into the room. The appearance of the pistol struck me as being a long one. I think I should know a similar one again if I saw it. Only one barrel, and it seemed to me to be a black one. I next remember getting up and staggered along by the wall for a few yards until I recovered myself. I was going away from Cutler Street. I must have been dazed as I have a very faint recollection of what happened then."

I recall being told that my great uncle subsequently lost his arm and retired from the force on a decent pension! He certainly was promoted to Inspector, and was living in the East End at the time of the 1911 census. 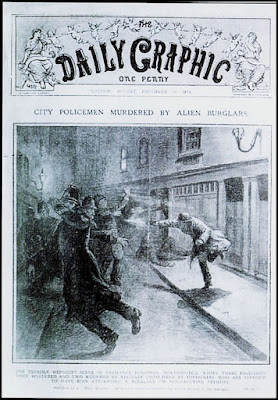 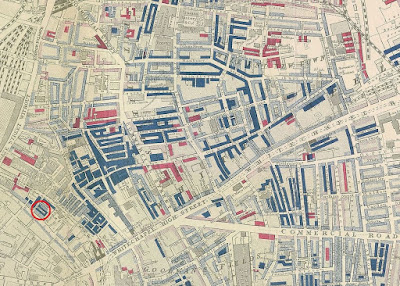